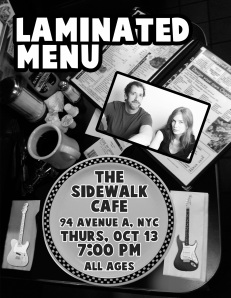 Our first show in the NYC. Sophia & Neal took the stage at The Sidewalk Cafe in the East Village on October 13, 2011 – the first of four acts for the evening and the only one to play before a full house. We played our whole set – including “October” – but left out “Lush Despair” because somebody…er, uh…neglected to put it on the set list. It was a great show before an enthusiastic crowd speckled with friends. So what if it felt like we were playing played a million miles an hour? We’d hit the stage in the BIG CITY and survived!