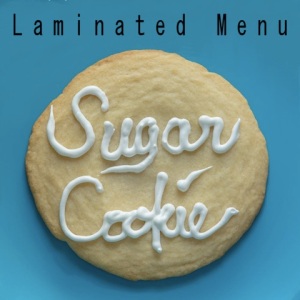 Laminated Menu has a new CD. Released in January 2014, Sugar Cookie finds the band rhapsodizing imaginatively on life, love, triumphs and travails with playful twists throughout. The radio-ready title track follows a woman bounding along like a pinball between bumpers, all but certain she’s in over her head. Boom riffs blues-like on insomnia, with surreal images of a sun that “doesn’t know its way around” and waking on a sofa: “Whatever, wherever…/All’s I remember is being shown the door.”

Chalk the Sidewalk rocks a favorite childhood artistic diversion, while Spanish Song sizzles like flamenco on overdrive, with Sophia howling ear-piercingly before describing an exotic pickup scene. Lush Despair is a wrenching tale of misunderstanding. Floating paints a dreamscape draped in subtlety. And Bicker unfolds as a fiery love song via argument, with married combatants accusing each other of myriad atrocities – “You lied about the laundromat, you lied about the wine/Every weekend at your mother’s, goin’ outta my mind” – before resigning to stick together…again. There are five more songs, including a stripped-down cover of Who? by The Brian Jonestown Massacre.

Listen closely and you may hear yourself in Laminated Menu’s music. And don’t be surprised if Sugar Cookie is ringing in your ears long after you’ve unplugged.